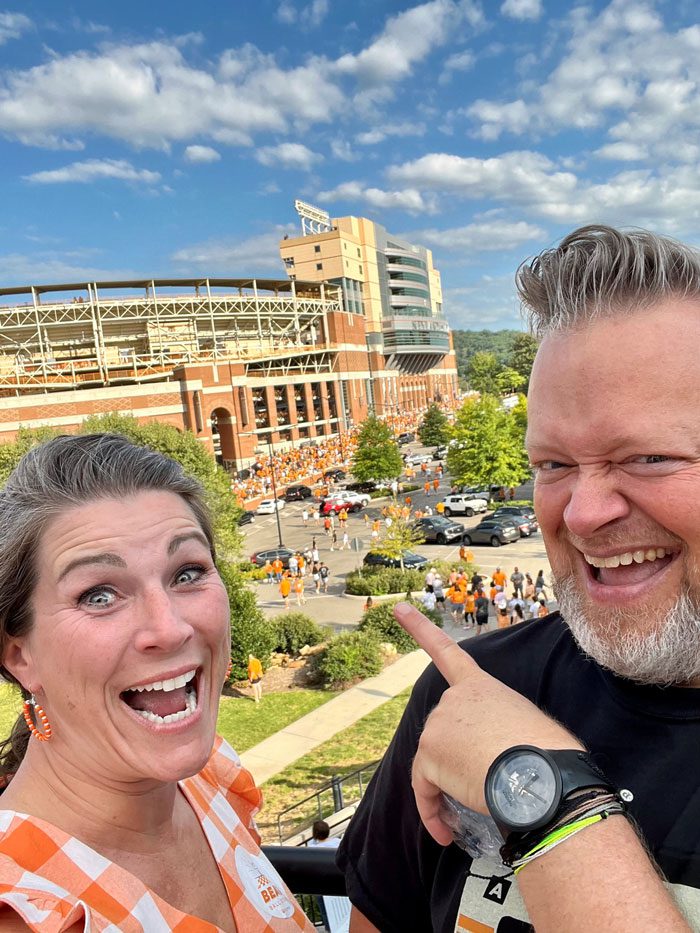 Hunter Quillen Gresham (’98) knows a kindred spirit right away, just by hearing how they pronounce Appalachia (she says it’s “app-uh-LATCH-uh”). As natives to the Appalachian region, both Gresham and her partner Steven White (’93) take pride in their heritage and their accents. It was one of the things they bonded over when they met—and that they share an alma mater, right down to the same college and school.

“There’s lots of invisible strings that connected us over the years,” Gresham said.

Those strings pulled them together three years ago, though they had previously connected when Gresham yelled out “Go Vols!” at a Virginia Tech staff meeting (at the moment the University of Tennessee, Knoxville was mentioned) and White sent her a sketch he made of Smokey to let her know she wasn’t the only VFL on that campus. They would eventually find out that, not only did they both graduate from UT, but they both earned degrees in public relations from the College of Communication and Information—her a bachelor’s, and him a master’s. The Smokey sketch Steven White made for Hunter Gresham.

Eventually they did connect, sharing their stories of UT, Knoxville, and their love for the region that has shaped their lives and personalities. Now, they are hoping to give students from Appalachia the same academic opportunities they had by establishing the Gresham-White UT Knoxville Alumni Student Success Endowed Scholarship.

“ I come from a philanthropic family—all Hokies except me— who give to Virginia Tech, and I’ve given to UT here and there, whenever they asked,” she said. “Then Sarah from the college reached out and I was kind of gobsmacked. I knew I wanted to do something, but I didn’t know what.”

Gresham and White began talking about their connection to UT and Appalachia, and that’s when they realized they could target the scholarship to College of Communication and Information students from 20 specific Appalachian counties—places they were individually or collectively tied to.

“There’s a lot of out-migration from Appalachia, so anything we can do to keep young folks and talent in the region, we want to do it,” White said.

Gresham and White noted there’s been a rise in art, music, and literature depicting the rich culture and diversity of Appalachia, and it is their hope the scholarship will produce CCI alumni who contribute to that effort.

“Someone can come from Appalachia,  get a degree, and be employed, but a degree in communication and information can help them spread more accurate and non-stereotypical views of what people in Appalachia are like,” Gresham said.

As for their parts as Appalachian natives and CCI alumni, the pair are both continuing to offset the stereotype in their professional roles. Gresham worked at Virginia Tech for 19 years in a variety of administrative event and communication roles before leaving in 2019—a serendipitous move that allowed her to homeschool her three children during the COVID-19 pandemic. She currently works part-time for The Blacksburg Partnership, which advances economic development and community improvement in the area. As for White, he is technically a “content producer” but what he actually does is sketch a doodle a day depicting the life and work of students, faculty, and staff across the Virginia Tech campus.

“We want to help any deserving student, but if we can help someone from where we’re from, even better,” she said.