Parton will be in attendance at the premiere event in New York City along with Geidner and his students. Tickets to screenings around the country are available at the Imagination Library website.

The film is being distributed by Abramorama, a Los Angeles–based company that has distributed numerous major documentaries including Brett Morgan’s Jane and Banksy’s Academy Award–nominated Exit Through the Gift Shop. The distribution is being supported by the Dollywood Foundation and Dollywood.

Land Grant Films’ mission is to provide UT students with real-world documentary production experience while providing local nonprofits with video assets they can use to raise awareness and funds. Headquartered down the road from UT in Pigeon Forge, Tennessee, the Imagination Library is one of the largest literacy-focused nonprofit programs in the world. It distributes more than 1.5 million free age-appropriate books each month to children in all 50 states and five countries.

When the project began in fall 2017, Geidner’s initial plan was to create an hour-long show that could air on television stations across the state, but the scope of the documentary grew as the crew interviewed people around the country working for the Imagination Library and those benefiting from the service. Two months into filming, the team flew to Washington, DC, to chronicle Parton and the Imagination Library presenting their 100 millionth book to the US Library of Congress.

“The Imagination Library has grown a lot since we started, and Dolly’s popularity has grown even more,” Geidner said. “I don’t think we ever expected it to get this big.”

Geidner was inspired by Imagination Library when his then-only son, Henry, started receiving the books as an infant. Fast forward to 2020: Geidner and his wife, Shelby, have a second son, 15-month-old Sam, who is now receiving books from the Imagination Library. Henry just celebrated his seventh birthday and continues to be a reader.

“He’s reading long books now and reading to his brother,” Geidner said. “We recently read the first Harry Potter book together. I’m sure I’m going to be sobbing in the theaters watching the film. There are a number of shots of Henry and Sam in the film.”

While Geidner has experienced the growth of his own family during the course of filmmaking, he has also witnessed the growth of his student crew. As the film entered its later stages, some of the students earned their degrees and still helped complete the project.

“I can’t speak highly enough about this group of students,” Geidner said. “They got thrown into the fire and rose to the level we needed. This setting turned into something much more real-world than I could have imagined for them.” 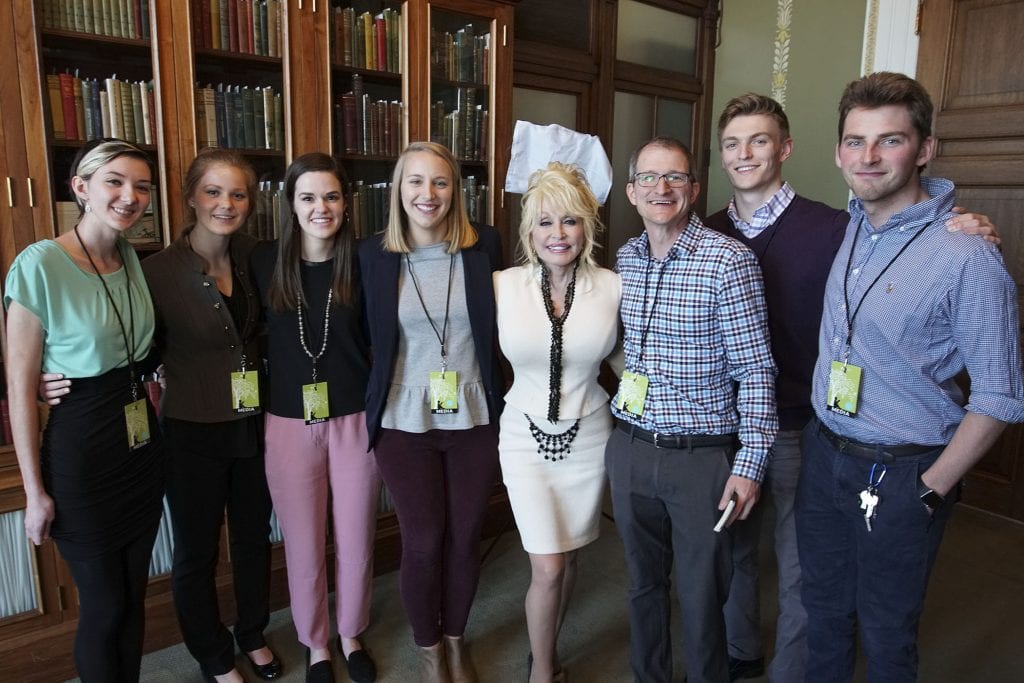 Brock Zych, the film’s director of photography, has remained in Knoxville as a digital video associate producer for Discovery after graduating in May 2018 with a degree in journalism. When he joined Land Grant Films as a sophomore, the team had only two documentary-quality cameras. It grew in equipment and potential while he was a student.

“After being attached to this project for so long, I learned that good documentaries take time,” Zych said. “Not only did I get amazing experience with cameras, but I also got to work with an awesome team who knew so much about the organization, Dolly, and the right angle we wanted to approach this film.”

Abby Bower, who served as writer and producer on the film, graduated with a journalism degree in May 2019. She had mostly worked on shorter, smaller-scale projects, so the film pushed her storytelling abilities to keep audiences engaged while weaving together narratives of people involved with the Imagination Library.

A lifelong reader, Bower said the journey from watching the Imagination Library’s distributors load books on 18-wheelers to meeting with an affiliate program providing children access to books in a remote town in Minnesota—and many steps in between—showed her the enormous scope of Parton’s program and reinforced the power of books.

“It was pretty incredible to think of what a gift of a book can mean for somebody and what it can do,” said Bower, who is a science writing intern for Oak Ridge National Laboratory.

In addition to The Library That Dolly Built, 2020 is shaping up to be a busy year for Land Grant Films. Ongoing documentary projects include a look at the historical Cherokee sport of stickball, Oak Ridge National Laboratory’s Spallation Neutron Source, the Korean “comfort women” of World War II, and an interview with civil rights leader Harold Middlebrook.

Geidner said the completion and national release of the documentary are a strong argument that students can pitch big ideas and projects, and the School of Journalism and Electronic Media and Land Grant Films can help them.

“I want students who are passionate about what they do and who want to tell stories and be part of their community,” Geidner said. “Though this story is of national interest, it’s still a local story about one of our organizations. It just happens to involve one of the most recognizable celebrities in the world.”