Nestled in the Great Smoky Mountains of Western North Carolina is a tight-knit community of the remaining members of the Cherokee tribe, the Eastern Band of Cherokee Indians. One of the tribes’ cultural traditions still practiced is the game of stickball. In the year 2000, nearly 100 women: mothers, daughters, sisters, cousins, and friends, took the field to play and exercise the matriarchal spirit that the Cherokee were known for. ᎡᏘᏴ ᏥᎾᎾᏛᏁᎮ ᎠᏰᎵᏐ ᎾᏛᏁᎰ / She Carries On tells the story of these women, how and why they played, and what the game means to them and their families, and the future of the Cherokee people.

The 17-minute documentary was produced by Dr. Natalie Welch, an assistant professor of sport management at Linfield University and alum of the University of Tennessee. As a member of the Eastern Cherokee tribe, Welch grew up watching stickball on the Qualla Boundary in North Carolina. 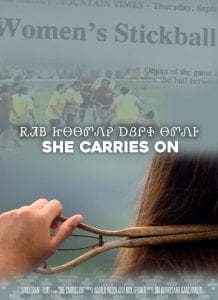 “Stickball was always a part of my community growing up and I honestly took it for granted,” Welch said. “When I started researching it from a scholarly perspective I realized how important it was for the women’s story to be told.”

Welch, working with University of Tennessee’s Land Grant Films, was paired with the Emmy-nominated directing team of Isaac Fowler and Tim Morris to create her film. Fowler and Morris, who were students in the University of Tennessee’s School of Journalism and Electronic Media when they started the project, worked with Welch to bring life to this important, yet undocumented part of her community’s history.

“As filmmakers, this project challenged us to consider the implications of centuries of history behind a spiritually and culturally important sport and address questions of gender roles in stickball,” said Fowler. “By the end of the project, we ended up with a story that shows how sport shapes our perceptions of others and the hope it can instill for future generations.”

The directors credit Welch with providing the insights that allowed them to properly document the complexities and mystery surrounding stickball.

“Indigenous people have been romanticized or dramatized in ways that place us as relics of the past or communities in despair,” said Welch. “This results in us not being viewed as real, living, thriving communities. Our stories are sacred and we need to be able to share them in our own voice and in ways that are relevant in the 21st century.”

Dr. Nick Geidner, the director of Land Grant Films and an associate professor in the School of Journalism and Electronic Media at the University of Tennessee, said, he was proud to support the project and its filmmakers.

“When Natalie first pitched this story to me,” Geidner said, “I could see her passion, and I immediately understood the importance of making this story. I’m so glad we were able to connect her with Isaac and Tim and help her turn her vision into a reality.”

ᎡᏘᏴ ᏥᎾᎾᏛᏁᎮ ᎠᏰᎵᏐ ᎾᏛᏁᎰ / She Carries On aired on East Tennessee PBS on Nov. 7 and Nov. 15. It was part of East Tennessee PBS’s “Appalachian Shorts” series and will be paired with the short documentary, Corbin Expulsion of 1919.

ᎡᏘᏴ ᏥᎾᎾᏛᏁᎮ ᎠᏰᎵᏐ ᎾᏛᏁᎰ / She Carries On was also an official selection of the prestigious LA SKINS FEST. The 14th annual festival, which aims to showcase the rising talent in Native American filmmaking, took place Nov. 17-22. Due to the pandemic, much of the festival took place virtually.

Dr. Natalie M. Welch (producer) is an assistant professor of sport management in the School of Business at Linfield University. She is an alumnus of the University of Tennessee and the University of Central Florida and has professional experience working with Nike N7 and Wieden+Kennedy. Natalie is passionate about advocating for Indigenous athletes and equity across all of sport.

Isaac Fowler (co-director) is an Emmy-nominated documentarian and video producer for VFL Films, the University of Tennessee Athletics Broadcasting Department, focusing on social media and marketing video content for Tennessee Football. As a storyteller, Isaac is passionate about stories of veterans, faith, and sport. Isaac is originally from Roane County, TN and now lives in Knoxville, Tennessee.

Tim Morris (co-director) is a 2018 graduate from the University of Tennessee. He now works as a video producer at Brentwood Baptist Church in Nashville, Tennessee. Morris’s previous work includes the Emmy-nominated short, Welcome Home Brother.

Nick Geidner (executive producer) is an associate professor of journalism at the University of Tennessee, where he also serves as the founding director of the documentary production program, Land Grant Films. Geidner’s most recent film, “The Library The Dolly Built,” tells the story of Dolly Parton’s Imagination Library and will be premiering in December. Geidner lives in Knoxville with his wife Shelby and their two children, Henry and Sam.

Land Grant Films is a documentary program housed in the School of Journalism and Electronic Media at the University of Tennessee, Knoxville. The program’s mission is to provide University of Tennessee students with real-world experience in documentary storytelling while providing local non-profit organizations with videos assets that can be used to raise awareness and funds. For more information, visit our website.