I will be the first to admit how nervous I was about traveling to Australia, particularly regarding my internship placement. However, I can safely say after my first full week of work, I had absolutely nothing to worry about. I currently work as a studio intern for The HubStudio, which is a hub for professional actors to obtain more training.

I have been given an amazing opportunity to create an online masterclass from the ground up. The class is “The Kevin Jackson Technique” which is based on Kevin’s 10 step guide called “The Creative Habit”. From creating the website to filming the online classes, it is ultimately my creative decision-making. The owners of The HubStudio and Kevin Jackson have put a lot of trust in me, so I hope to do my very best over the next 45 or so days.

Not only is the work I am doing relevant and interesting, but it is also mind blowing when I think about it. For example, we need testimonials from actors who were taught by Kevin Jackson in order to help market and advertise the online course. Because of this, I am in contact with the agents of Cate Blanchett, Elizabeth Banks from The Hunger Games, and several other actors from Orange is the New Black and Hawaii Five-0. I also pass by several famous Australian actors and actresses while I am at work. I just don’t realize it until my co-worker tells me afterward who that just was.

From the opportunity I have been lucky enough to obtain here, can sprout into many other opportunities as I head back to America in April. For one, The HubStudio would appreciate keeping me on the online course project as they create more courses for other acting teachers, while also getting paid for doing so. Along that line, Kevin Jackson has admitted that he is quite fond of me and wouldn’t mind connecting me to film opportunities in L.A. if I do a good job with his online course. It is very nerve-wracking and pressuring to know that this online course puts a lot of weight on whether or not more doors will open for me after the program. However, it is well worth it.

The cherry on top of this amazing internship opportunity comes from the ticket opportunities. Over the weekend, my boss gave my apartment and myself tickets to go see the opening night of the play ‘Chimerica’. We got all dressed up for the night out and had one of the best nights we have had so far during our stay in Sydney. The play was easily the best play I have ever seen.

Like any normal person, we figured that the end of the play meant the end of the night. Boy, were we wrong. As soon as we walked downstairs, there was an after party with free hors d’oeuvres and wine. I could just tell from the atmosphere that we were surrounded by some pretty well-known and important rich people. All of us tried as hard as we could to blend in, but I imagine that failed as soon as Emily dropped her plate of food and we immediately had to abort the situation. All in all, it was one of my favorite nights here and will forever be a great memory to hold onto. Thank you HubStudio for taking me in and giving me the opportunity of a lifetime.

Note: Read Hunter’s blog for a funny and in-depth account of our night at the premiere. 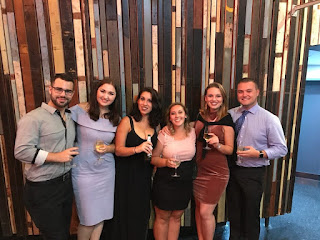