This past weekend, I ventured outside of Sydney for the first time since arriving and went surfing camp in Bendalong Point. Originally, it was never on my agenda to learn how to surf, but a lot of others were going, and I knew I would regret it later on if I didn’t take the opportunity. Even though I have been immersed in a new culture for a few weeks now, but this entire weekend was the first time I had felt true “culture shock.”

Around 70 people lined up near Central Station to check in and put their bags in the trailer to hit the road. My Haribo Gummy Bears were in hand and I was ready for a four hour bus ride down the eastern coast. Upon arriving and realizing that I was completely out of my element (I don’t camp), I unpacked and met the coaches and the people in charge of the camp. As soon as the crew introduced themselves, I could tell that these were the stereotypical Australian surfers I had been waiting to meet since I got here.

The next morning, after roasting in my tent all night, I was awakened to the incessant chirping of who knows how many kookaburras. I sit up in my bed to find myself staring face to face with a momma kangaroo and her joey a couple of feet outside my tent. At this point, I’m only thinking, “Where am I and what have I signed up for?” I noticed that I was finding myself asking this same question throughout the rest of the day.

After feeding stingrays in a bay near the camp, we headed out to the beach to learn how to shred some gnarly waves. (Am I a surfer yet??) We hadn’t even hit the water yet, but the drills our surf instructor guided us through were already making me sore, so I knew I was in for trouble. It took me a few times, but I finally stood up on my own and rode the wave all the way to the sandbar. I was amazed at myself because I never thought I would ever be able to say that I would learn to surf, let alone learn to surf in Australia.

We had lunch at the campground and kangaroos were casually everywhere. Another surf session was that afternoon, and after hauling surfboards up the beach to the buses, it was time to come back and hang out with everyone for the rest of the night. It was really great to get to know the local Aussies and even people from other parts of the world, too. Some of us ventured down to the beach and had a bonfire; some of us were lucky enough to see a shooting star. All I knew at that moment was that I was so glad I took a chance and branched out of my comfort zone.

What I’ve learned from this past weekend is that the carefree lifestyle everyone told me about before moving here is true. I saw this in some aspects of city life, but these people live it in everything they do, and I really admire that. I wish everyone could live like that- without a care in the world. For the first time, it hit me that I was in a new country. I was surrounded by nature that was not like the Tennessee mountains and valleys back home, wildlife I had only seen in the zoos, and people who live the lives everyone else dreams about on a daily basis. It was a weekend of growth, to say the least, but I definitely learned what it truly meant to live a “no worries” kind of life. 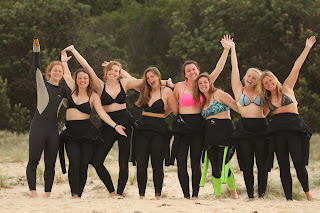